Why You Must Choose MERN Stack for your Next Web Project? 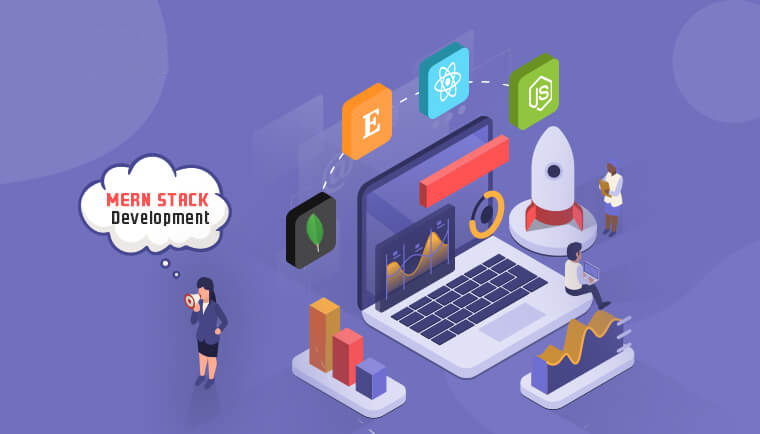 Yes, you read that right. I am talking about MERN Stack- one of the newest and powerful Stacks to develop the web applications.

After the success of MEAN, we have MERN to use and needless to say; it is equipped with some fantastic advantages to the web developers to build complex web apps quite easily.

Here, we are going to talk only about the MERN stack, telling you more about why you should choose it for your next web project.

Let’s dig deeper to know about it

What does MERN Stack stand for?

What is MERN Stack Development?

MERN Stack is a JavaScript Stack that builds web applications easily, efficiently, and quickly by combining all of these technologies- MongoDB, ExpressJS, ReactJS, NodeJS.

Well, a stack itself means the combination of various technologies to develop web apps. And, without a Stack, it is impossible to imagine a web app to function so amazingly.

More particularly, it has been designed to help businesses like yours to meet the demands of the end users digitally.

Its four components, as mentioned above provide an end-to-end framework for the developers to work upon.

There are various Stacks available in the market for the web developers. But, the most popular ones are– MEAN and MERN.

So, let’s check out what is the difference between MERN and MEAN stack.

How does MERN Stack differ from MEAN Stack?

The difference between MERN and MEAN is the use of technologies.

In MEAN Stack, it is- M.E.A.N. – MongoDB, ExpressJS, AngularJS, NodeJS.

The main difference between the two is – AngularJS and ReactJS. See the ‘A’ and ‘R’ in the name of these stacks respectively. 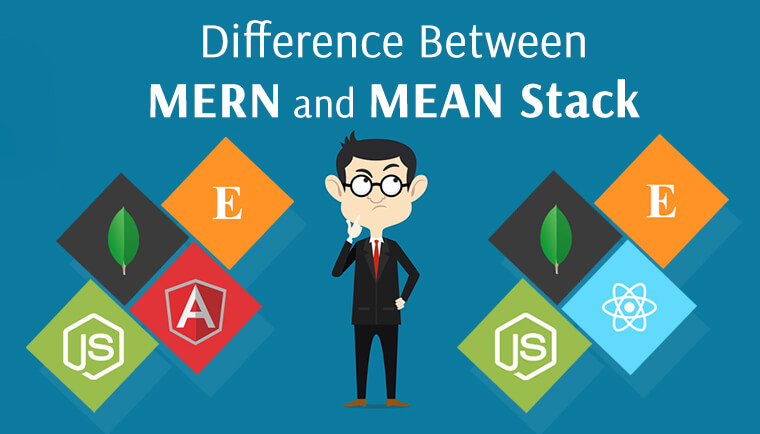 A lot of modern-day developers prefer working on ReactJS instead of AngularJS.

React is a JavaScript library, whereas Angular is a front-end JS framework.

But, how MERN is better than MEAN Stack? Or, Why should you choose MERN Stack development?

To make things more clear to you about the choice of MERN stack and not any other one, let’s talk more about its benefits

Advantages of Using MERN Stack for Your Web App Development 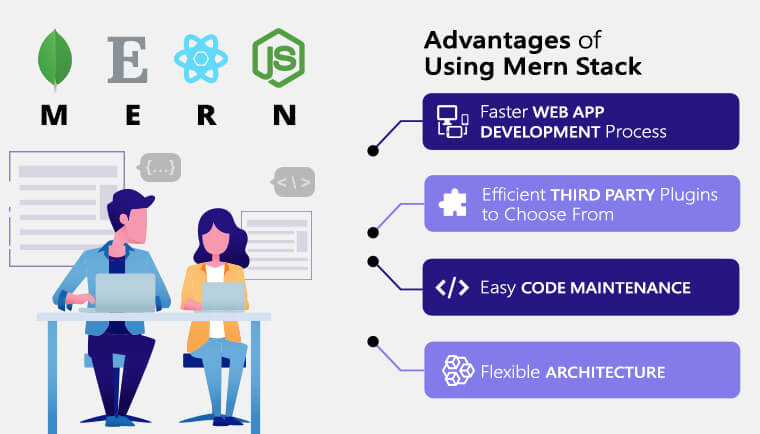 There are many reasons why MERN stack is gaining traction in the web development community. Not just that, it has a good chance of becoming the next big thing in the full-stack web development methodology because of the following benefits

Today, there is a race of developing web applications faster. In fact, when it comes to choosing the right web development company, delivery on-time is considered to be the top factor.

So, one of the top benefits of using MERN stack for your web development is the faster development process.

Well, this is because every line of code in this stack is written in JavaScript. JavaScript is a programming language that is used for writing both the client-side and server-side code.

Choosing this stack simply means one language across all tiers of work, without any need to switch to some other language in between.

Your web developers need to only master JS and JSON to use MERN Stack and everything is set.

Whereas in case of a tech stack with multiple programming languages, they may need first to figure out how to merge them to use together.

As a result, your web app is built faster than you imagine.

Whether you know in detail about React or not, you need to know this

One reason behind its popularity is the impressive count of third party plugins.

For some specific needs related to your project, the hired developers may need a particular component which is not available in the React’s framework.

There is nothing to worry about as it has native modules and JavaScript modules available for use as third-party plugins.

So, by opting for MERN stack, you can rest assured no obstacle will stand in between the process of your web app development project.

Another substantial benefit of MERN stack, isn’t it?

You may feel the web app development project to be a one-time investment.

But, maintaining, updating the app with new technologies, fixing bugs, etc. are the part of the long-term process.

MERN stack has React in it as a component, which in turn is known for unidirectional data flow.

This one-way flow makes it easier to develop the app and also speeds up the process of bug fixing.

Ultimately, ease of maintaining the app’s code will result in its better performance which is one of the top advantages of using MERN Stack.

Being a part of MERN stack, ReactJS is a library, not a full-fledged framework.

It is known to support a wide range of solutions, being away from the one-size-fits-all architecture.

So, whether you have complex web app requirements, MERN Stack offers your web developers with a flexible architecture.

This makes the stack highly flexible for use by the developer community and hence, why you need to use MERN Stack.

It is true that there is a lot of overlap between different stacks out there. So, making the right choice should be based on the strengths of these stacks.

Given the comprehensive benefits, MERN Stack has the required potential to make your web development project successful.

Using MERN Stack, integration issues get resolved when they work on multiple programming languages. So, this becomes an additional benefit of using the MERN Stack.

Also, all the features and benefits of React are included when using MERN Stack for your web development. So, it MERN becomes the right framework for your next web app.

Are you working on your next big idea? Let’s discuss how MERN Stack will prove to be a success driver.